I was amazed that we haven't done this walk since Feb 2016, almost 3 years ago. It's time to do it again BUT last time we got a bit lost at the top, hence the need for this extra recce walk.
Additionally, we have had reports that Cafe Torinho is OK for lunch....a prata de dia ( rather than a la carte) for about 8€ , but only 1 glass of wine...so we should get change for the charity out of 10€ pp.

So, it's a double recce...the walk & the restaurant....be prepared for the unexpected!.......and probably best if we didn't have dogs on this occasion.

Please also note the walk is quite long at about 2 hours 50 mins.

A circular walk ,north of Silves around Aguas Bellas through interesting countryside, with some small streams, that are usually easily fordable. Please note there is a LONG uphill slope, not particularly steep, but quite long!

Directions: Drive over bridge at Silves & turn right at traffic lights. At next roundabout take the 2nd exit towards the castle. Passing the cemetery walls on your right take next turn right. Follow this road until you reach the Cafe Terinho on the left hand side, about 4 kms from the roundabout in Silves.

Please do not park in front of the cafe : there is plenty of space alongside the road after it......or in a carpark, 150m on the right after the cafe.

If the weather turns for the worse, any cancellation notice will be posted here by 0830 on the day ; please check if in doubt...or ring me.

All walks are at your own risk.

No charge, of course.

Please indicate below if you are able to come

Count me in for the walk and lunch please Geoff.

Hi Geoff
We would like to join you for both walk & lunch.
Jon & Dawn
Top

That's my 10 thanks. Walk closed.
Top

Lovely day, bit cool, some clouds, but 9 of us gathered for the recce : Wendy had a blister and couldn't make it, but no sign of Janet nor John.

Never mind, we set off and were surprised to see how near the previous year's fires had got to some of the buildings, and how that burnt out car ended up half way up a hillside? 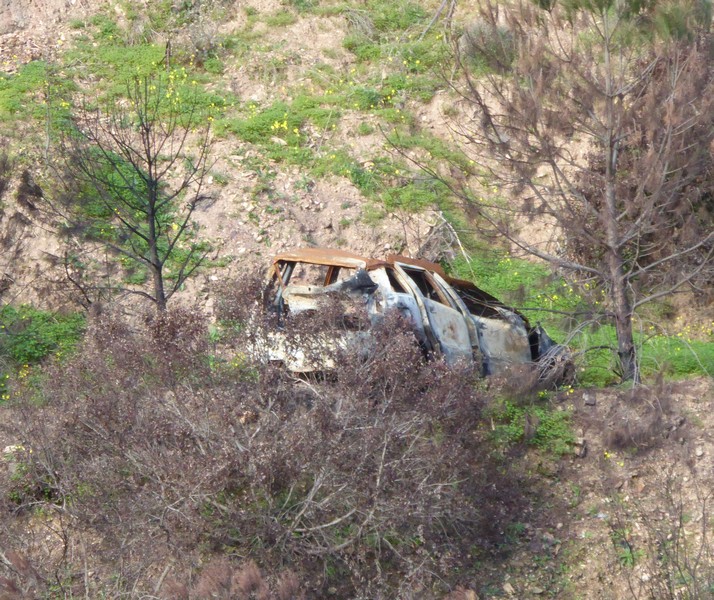 Our old friend the husky dog wa still there, but a bit more overweight, and he didn't want to walk with us: 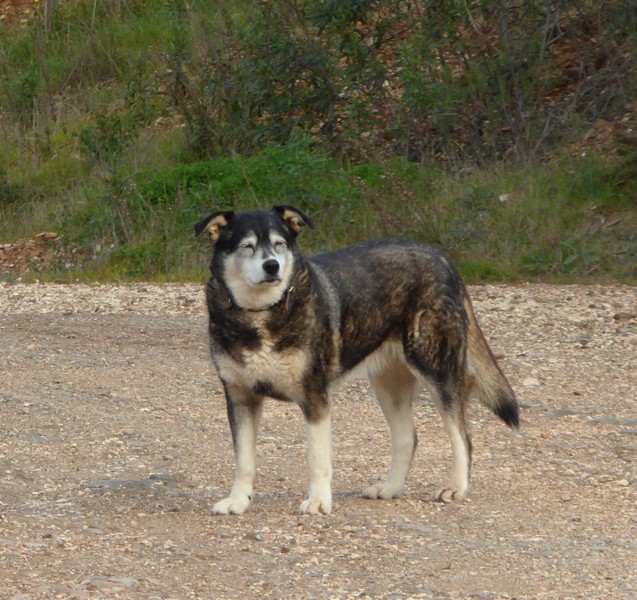 I thought the big hill would take 20 mins : the advance party made it in 15, but we all got there:

The downward track from the top was found quicker than expected, so down hill and past the old madronha factory : 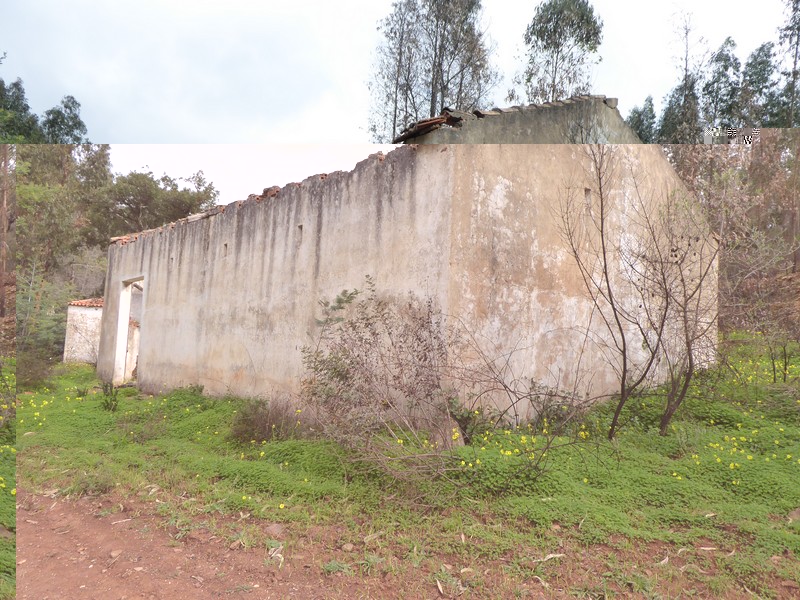 though we couldn't see any to pick , literally " to catch"... 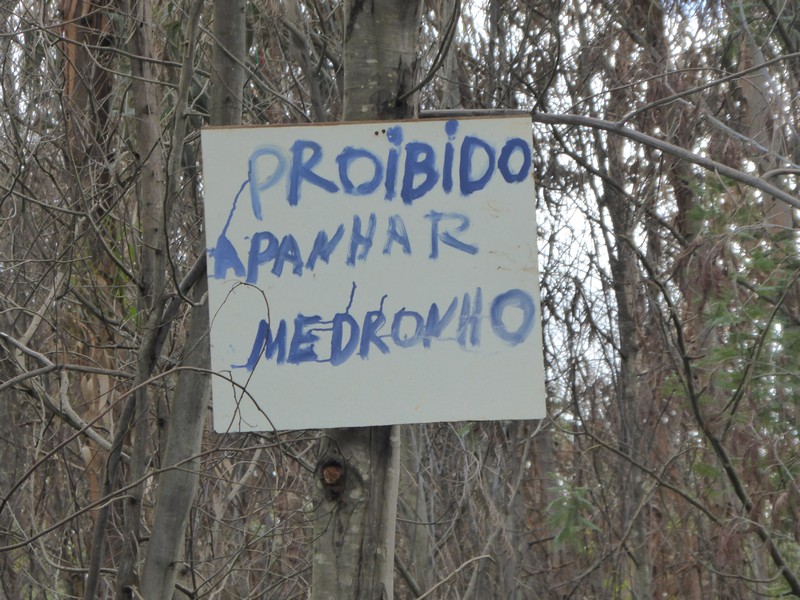 Back via the streams to a beer in the sun : first part of recce successfully in 2h 40m, now the second.

Auspices were good...lots of locals there, BBQ in full swing : 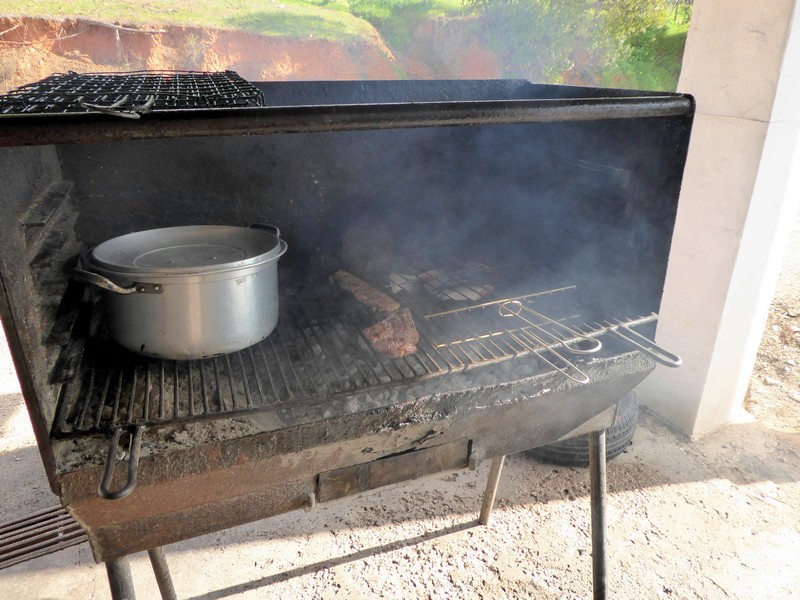 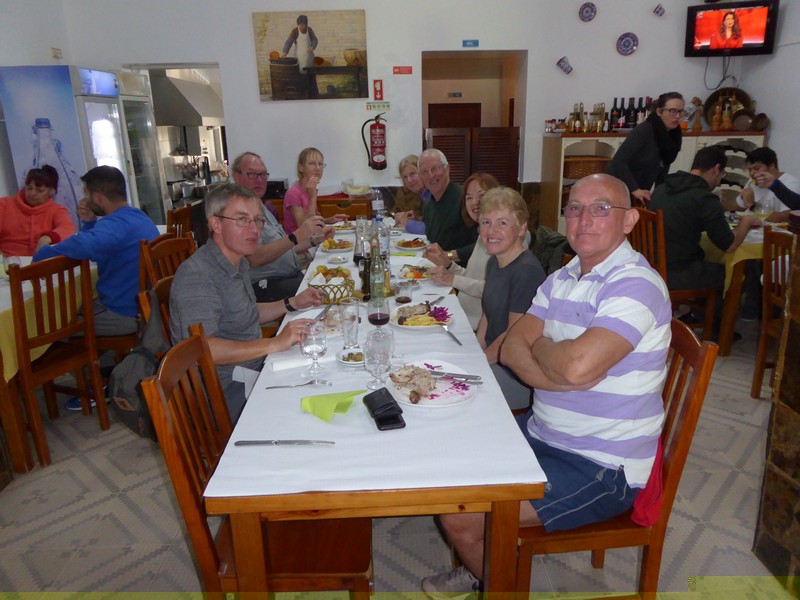 Those that has pork stew thought it was great...masses of it, lovely and tender, great flavour....and tastiest chocolate mousse for a long time....those that had the chicken weren't so enamoured...to quote from Jon :

" We thought it was a bit of a “mixed bag” - you could not fault the welcome/service but the food was probably not up to the standard of Mira Rio or Norinho. Mike, Dawn and I all had the chicken which whilst well cooked was a bit short of meat and oddly the chips were cold!

It wouldn’t be a problem if we went there after a Monday walk instead of driving somewhere else but the chicken and chips are better at the other two!"

Must say, I would not demur : Jane's sardines were cold too, and she had an egg much to her amusement :

So the juries out on the cafe....perhaps the moral is to go with the prata de dia....or drive to Mira Rio. Basic meal was 8€ pp but ended up at 9€ pp with some extra wine....

Thanks to all the brave souls who recce-ed...and here's the girls gossiping in the sun: 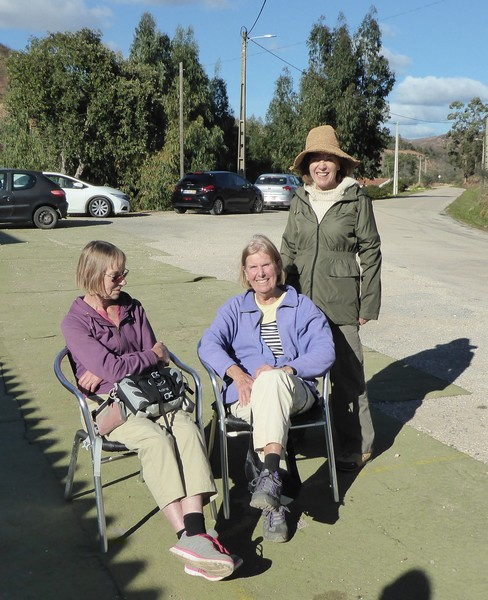 Oh my goodness Geoff,
I’m loosing my mind! I thought in your message you were referring to my non attendance yesterday at Linda and Russell’s walk. I had completely forgotten my committment to your recce walk today.
My sincere apologies.
Look forward to seeing you next week
Top

Oh my goodness Geoff,
I’m loosing my mind! I thought in your message you were referring to my non attendance yesterday at Linda and Russell’s walk. I had completely forgotten my committment to your recce walk today.
My sincere apologies.
Look forward to seeing you next week

Forgiven.....must be delerium from the flubug or whatever...trust all will be well for next week!
Top
Post Reply
10 posts • Page 1 of 1