We haven't done this for 2 years, so hope it's still there : will try & recce it beforehand.

The first 15mins. or so is a little " off piste", but along an old overgrown track. Shorts are not advisable, unless you don't mind being scratched , but it does circumvent the need for any road-work. The rest of the walk is on good tracks, with a mixture of short(ish) ups and downs.

Directions: From Lagoa, drive west on the N125, over the bridge & turn right for Monchique , just before the turning to Portimao. Drive towards Monchique for 10 K until you come to Rasmalho. There is a cafe on the left called " Riba e Serra ". Please park on the right, just before the cafe, in a small clearing.

Please note that the walk will be cancelled of the weather is poor. I shall put a note on this website at about 0830 that morning, 0900 at the latest.

All walks at your own risk.
There is no charge.
Please indicate below if you are intending to come and whether you want lunch. The winter walks were rather congested and we had to limit numbers to about 20.

Lunch ( optional) :The cafe does a prata de dia for about 8€ which has been highly recommended, but charge will be 10€ to cover tip and contribution to Mike & Su's Supporting Families charity.

Please see post below from me about change of lunch venue...and coffee venue!
Top

Dawn and Jon for walk and lunch. Thanks Jon.
Top

Hello Geoff,
Please count me and Nicholas in for the walk and lunch. Thanks!
Top

Please book in Carol and I for walk and lunch.

Hi count us in , no lunch thanks
Top

Please include Linda and Russell for walk and lunch. Thanks
Top

Hi
Please include 3 for the walk, Jen, Steve and I and the woofs. Will not stay for lunch
Thanks
Wendy
Top

Walk is closed, but squeezing in Graham & Ruth, plus Wendy, Caroline & Karen.
Top

Hi Geoff
Sorry, Steve and I will not be with you on the walk, Ikea have change the date to fit the kitchen, 14th was the only date they could give us before the end of the month!

Thanks for letting me know, Wendy

Having done a recce of this walk yesterday, I have found that the restaurant is unfortunately shut for Christmas holidays! Lunch will instead be at the Ourique, a 5 minute drive away. If the weather remains good, we should be able to eat outside.
Linda & Russell will be booking a table and getting your choices before the walk starts.

Meet at cafe " Riba e Serra" as described above for a 1000 start. HOWEVER, if you want an early coffee, then the Ti Emilia should be open : this is 5km from the N125 turn-off, on left hand side of road, about 200 yards before a roundabout...and 3km before you get to the start of the walk.

Oh, and the first bit is a bit overgrown : as above, I don't recommend shorts.
Top

Another beautiful sunny day....7 of us met for an early coffee at Ti Emilia...and then 20 gathered for the walk, initially through some wet grass and spiky thorns and cistus...the white blob is Zac's tail!

It was damp and shady , but the boys soon stripped off to show their multi-coloured tops: 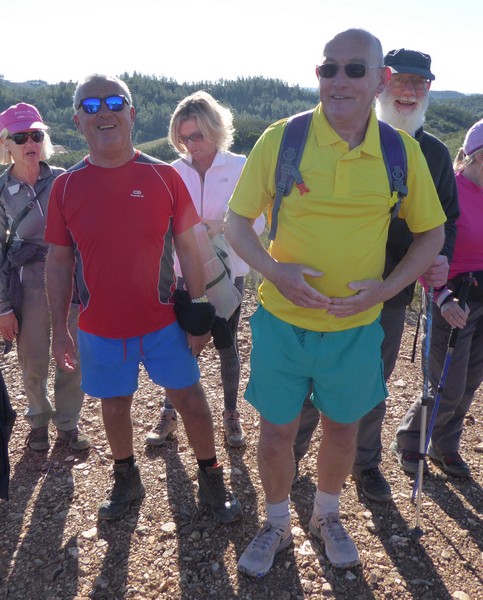 A bit of a roller-coaster ride, ups and downs : 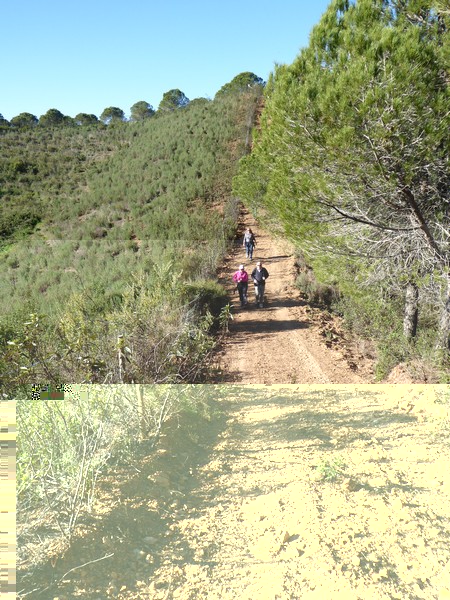 until we got to a marker that I strangely didn't recognise : 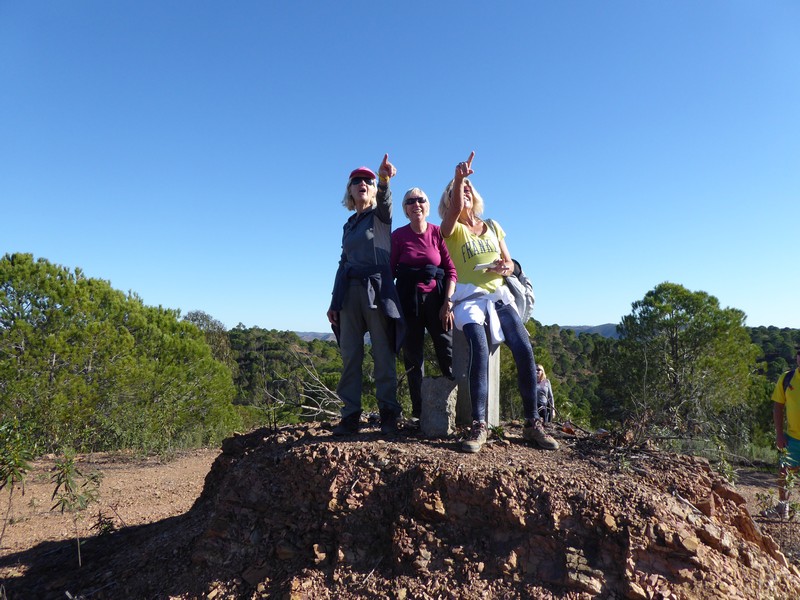 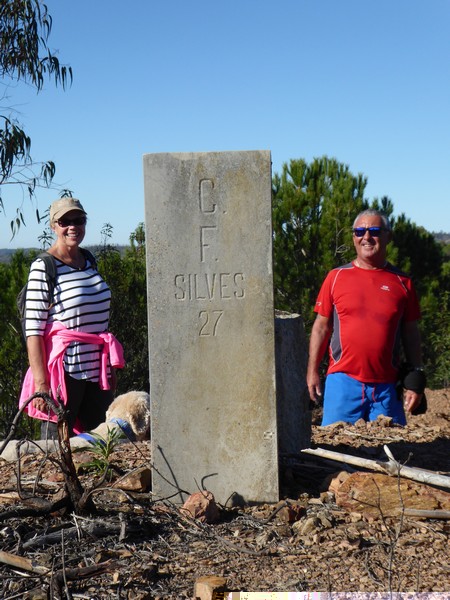 But a special word of congrats is due to Carol for (wo)manly coping with the ups & downs after 2 hip replacements;

Time for a group photo :

but I had a nagging doubt that I hadn't seen that marker before...because I was too busy talking and walking & missed a turning!

Anyway, all back safely, about 2 h 10m allowing for a long discussion between Linda and the restaurant about ordering lunch.....10 chickens, then no chickens, then 8 chickens....

Anyway, a short drive from the finish to the Orique...only for poor Isabel to find that her carkeys and phone were locked in the car! A lovely lunch outside in the sun for 18, blue skies, encore du vin, tender pork, lots of chickens, good company...what more could you ask?...and all for 7.5€...we made another 20€ for the charity, so thanks to all, especially to Russell & Linda for booking tables at Ourique and the saga of ordering! 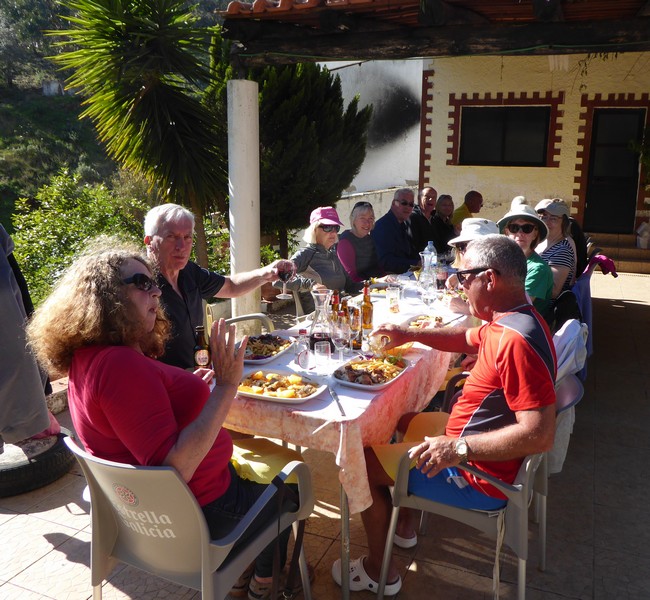 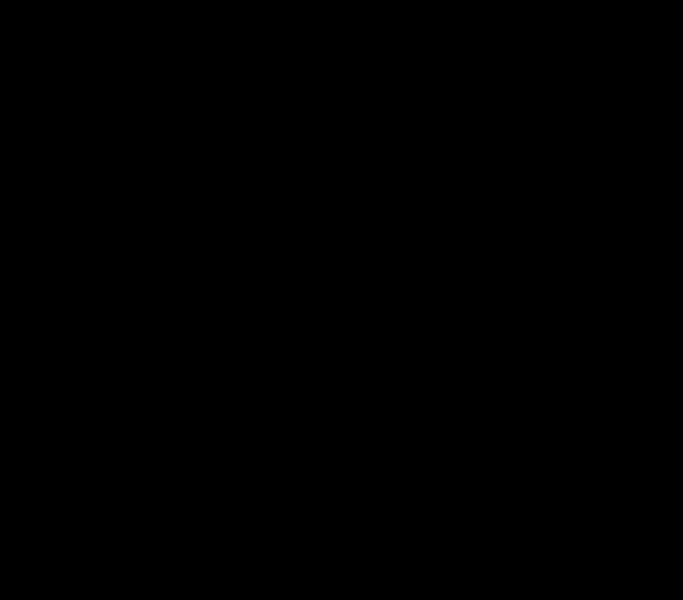 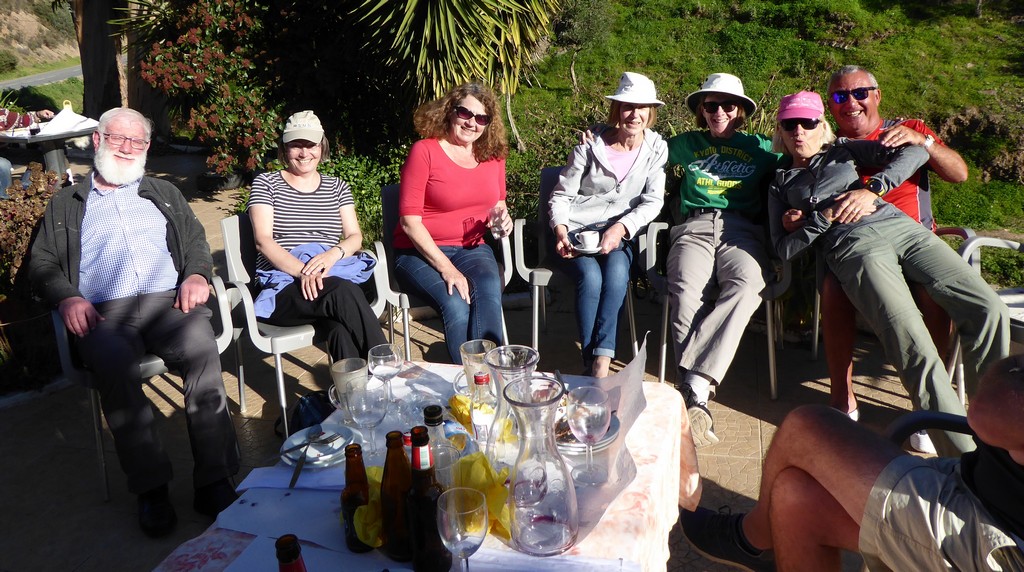 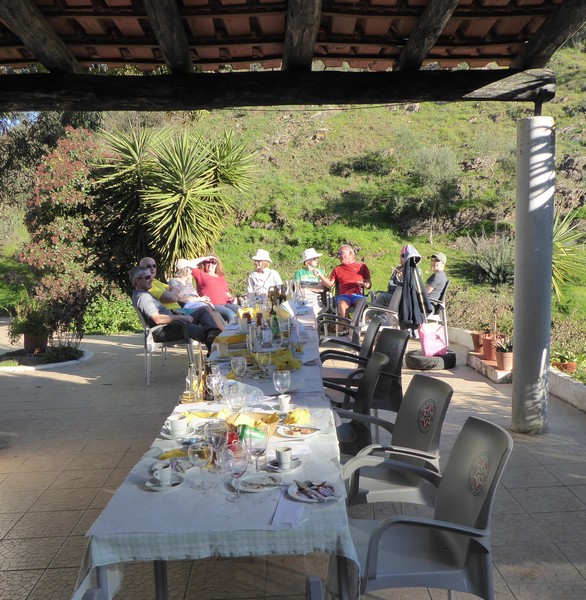 PS
Poor Willie turned his ankle over on the walk , our first casualty for some time...and here are some pics from Gill...... 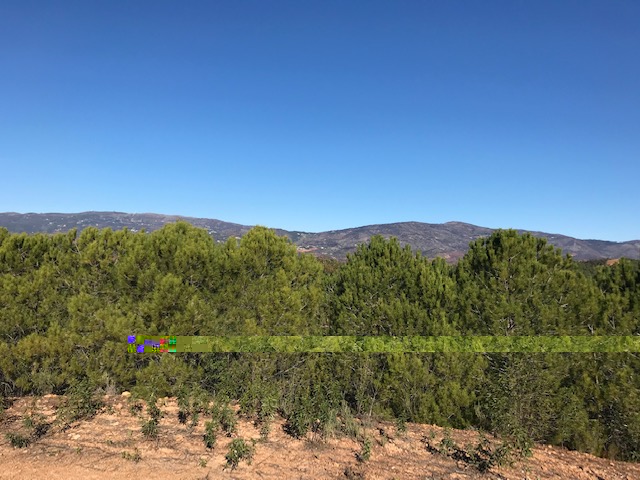 Girls on top she says! 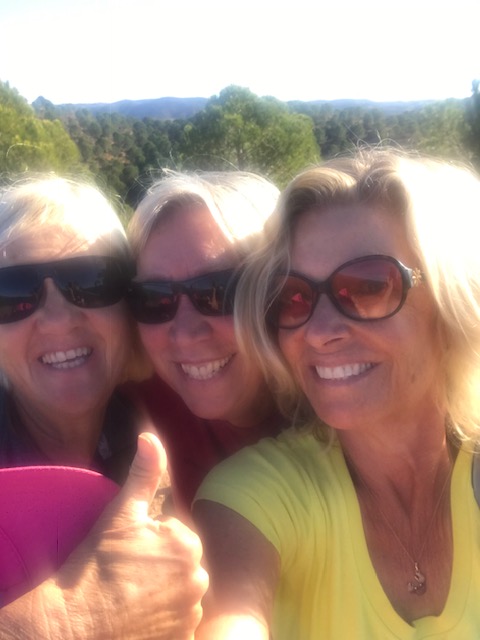 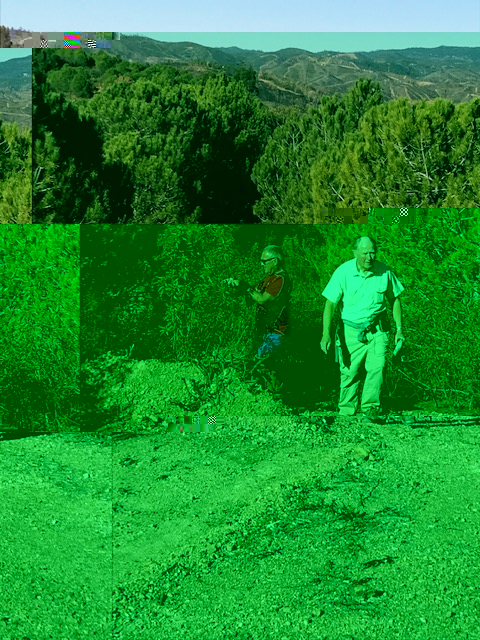 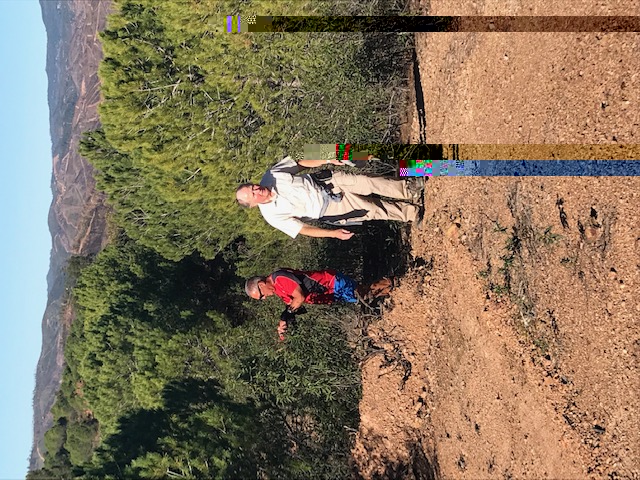 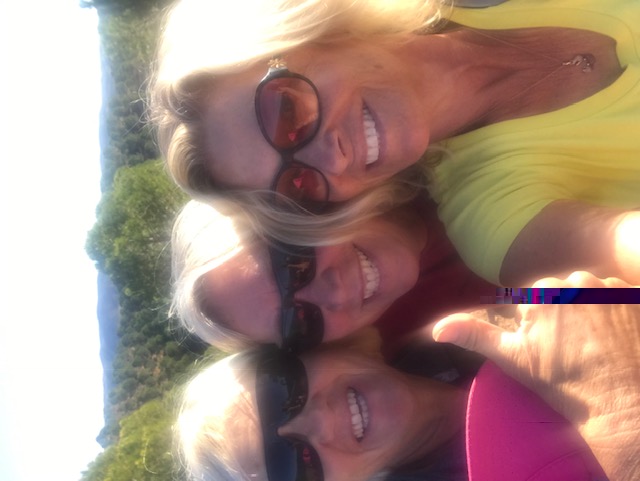