Share experience regarding ownership of property and/or living in Portugal.

Carvoeiro's newest tourist attraction is now under construction. It's a 40 meter communications tower for the Portuguese security services and it's going up right in the middle of tourist homes in Areias dos Moinhos.
Best of all, it is a deep, dark secret. Nobody knows anything about it because Lagoa Camera doesn't believe this is the business of property owners and businesses in the vicinity. The project originated in a government ministry in Lisbon - and that was good enough for the Camara to approve the plan without telling anybody.

This not a tower for mobile phones. It is for the military and nobody knows whether it will use microwaves that generate radiation because the Camara didn't see fit to ask. The tower will be less than 8 mtrs from our villa's master bedroom - but it will dominate the skyline (no doubt with red lights at night to warn low flying aircraft) for all the villas on the upper level of Areias dos Moinhos - and will also be visible from the cliffs.

In something less than two weeks, the project has moved from clearing the piece of land containing the water reservoir for the area - on the pretext we would benefit from a "beautification project" - to the sudden appearance of heavy equipment and the sheepish admission that the real plan calls for a very big communications tower. In less than 24 hours the footings have been dug, concrete poured and the base of the tower installed. The clear plan is to get this monster built and operational before anyone can argue about its value and placement.

If you live in AdM, or know someone who does, and would like to add your/their name to a list of people who want the Camara to be answerable to the local residents please let me know asap, either via this forum, by phone 282-359-199, or by e-mail: haljones@smpatico.ca Thanks, Hal Jones
Top

Where are all the replies? or suggestions and support against this horrific project.
It is true, the footings. are already in, electrical connections poking through the poured concrete, no Aprils fools joke. A petition has been set up and urgently needs signatures. I know that some of you who regularly post are owners on Areia dos Moinhos, Pato for one and a few others. Please help to at least try to stop this monstrosity. If it can happen on Areia dos Moinhos so secretely, it can happen on almost any tourist development in the Algarve. Even next to your own villa. It will be positioned right up close to the boundary wall of the urbanization road and No 34 ADM. Imagine it will be seen for miles around, not just by the development owners. What electrical radiation will be produced and will it affect the satelite reception, or worst of all affect the health of the villa residents?
Come on, help your fellow Carvoeiro owners and lend some support and sign the petition.
I look forward to seeing some posts on this subject. Silki
Top

I think this is very underhand the way the Camera has gone about building this, unfortunately we are no where near the area or I would be signing the petition.

Come on you guys, lets get some response to this....
Top

Will this affect the owners at VDM as well ?

We are on the other side of the valley but do have one question , is this primarly a tourist area or is it a portuguese residential area if the latter then how do they feel about it ??
The residents in a valley nr Silves won their campaign to get the EDP to relocate overhead powerlines so it can be done.
Top

Where on this map (Areias dos Moinhos / Vale de Milho) is it situated? We rent a villa on ADM each Christmas, and I'd be interested to know its location.
Top

No 3 ADM reporting in.

Well that's how it works is it, devaluing peoples property without so much as
notifying the residents, what about health and safety? I'd like to know what's going on and will fight for the right to know, I can't build a carport without permission, the residents of ADM should band together and fight the camera, what about the cafe, will we sit outside and get radiation burns with our chicken piry piry.
The only way to fight this obvious monstrosity in our midst is to start a fighting fund and fight it legaly, based on loss of revenue from lettings, devaluation of property and health and safety.

Count me in on the fight, I'll even demonstrate (no comments please), we'll have to move fast though, pity they didn't employ the people who are "rejuvenating" the square, It's high handed bureaucracy gone mad. Slap an injunction on them now, the residents have a right to know what's going on.

One thing puzzles me though, I'd heard it was a water tower, where's that rumour coming from?
Top

Michael Crane wrote:Where on this map (Areias dos Moinhos / Vale de Milho) is it situated? We rent a villa on ADM each Christmas, and I'd be interested to know its location.

It's behind you Michael, Oh yes it is!

I thought this was an April fool set up! Will have a word with our management agent in the morning. He is closer to the so called tower than we are and he was sounding pretty chipper the other day. However, if true, it shouldn't spoil the view so no refunds (Michael)

For those asking about the placement of this b****y tower, X marks the spot. 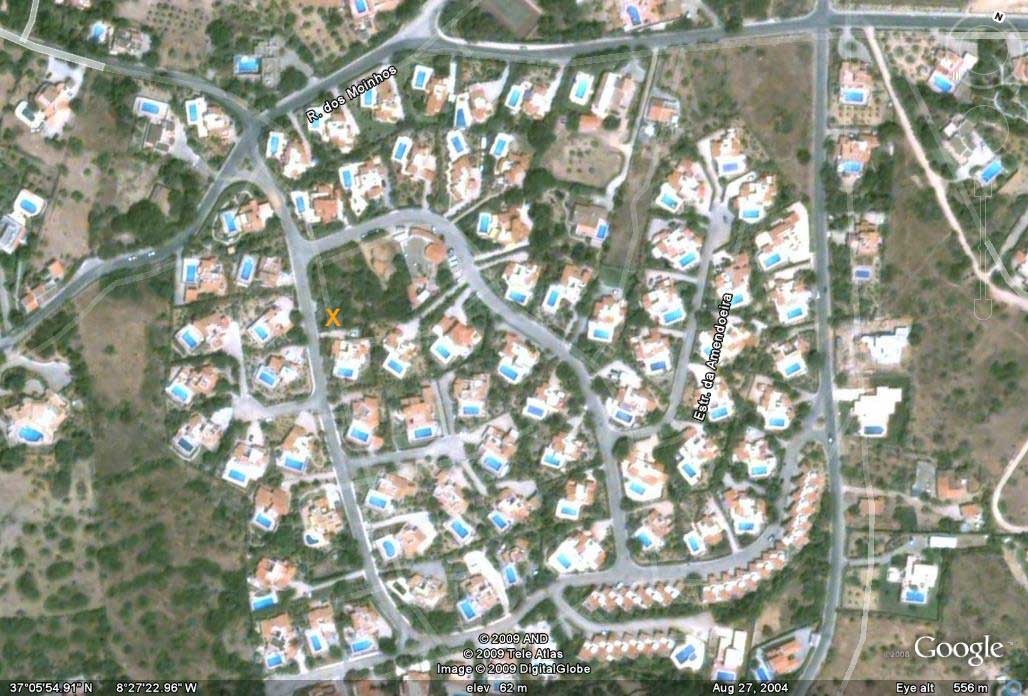 Mmm, we are just to the left of the R. so it might be visible. It certainly will from the roof terrace.
Top

Hal
I have e-mailed you re this intrusion on our Estate and intend to fully support you in everyway we can to fight this illegal tower.

I agree totally with Palo and we need to do something promptly to stop any further construction, however ,as you are on the spot up to you to activate on our behalf but you have our total support
Top

beekeeper wrote:Hal
I have e-mailed you re this intrusion on our Estate and intend to fully support you in everyway we can to fight this illegal tower.

I agree totally with Palo and we need to do something promptly to stop any further construction, however ,as you are on the spot up to you to activate on our behalf but you have our total support

I think Health and Safety information is very important, after all we've got to assure our clients that there's no danger of radiation when they hire and we need written proof of that from the Camera, we may also need insurance cover to satisfy their own legal requirements under the recent letting laws

From the Resident, http://www.algarveresident.com/story.asp?XID=31002
Top

Well I've just spoken to Chico our management agent and it's getting pretty heated with regards to this tower. Our names have already been added to the petition and they expect more press and at least one TV news crew over the weekend. Since the camara got wind of all the protests, they have increased the number of staff on site in case it gets stopped! One problem here is the judicial system is about to close for Easter for about a week! One suggestion would be to sabotage it by filling the hole with water, might slow them down a bit. Pity they're not working on the square project.
Top

Dear all, It seems that my house is also right opposite this tower so I am badly affected as regards value of house, asthetics, health issues etc. I have done some research on the WHO (world health Organisation) website and have found that Portugal is a signatory of the "Electromagnetic Fields (EMF) Protection" act. I'm not able to interpret this as a non-physisist, but is anyone organising a legal challenge to this in order to affect an injuction preventing the work carrying on?
link to WHO website is:
http://www.who.int/docstore/peh-emf/EMF ... ble_po.htm
As for those who think they will not be affected, think of how high 40 meters is. That's 120ft tall - It will dominate the skyline of east carvoeiro. Sign the petition if you are on that side of the village. Don't just do it for the sake of those of us right next door, it affects you too.
Thanks,
SR
Top
Post Reply
109 posts